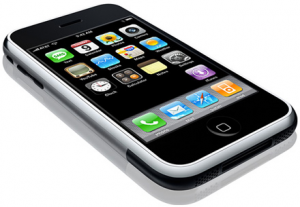 The iconic technology company Apple (NASDAQ:AAPL) initially came out with classy, cool and user-friendly music players that took the world by storm until every second person was walking around with a small, portable gadget known as an iPod stuck in their pockets. Then a few years later, Apple went a step further and combined their amazing music player features into a phone and not just any type of phone-a smart phone. Apple has combines two of its best qualities in this smart phone, their ability to maintain a status of class and quality and their motto of ‘Simple is best’. The iPhone brings to users not only the feature of a mobile phone but a music player with a larger and clearer screen on which you can also watch videos and movies and surf on the internet.

In a lot of ways the iPhone has defined the way users use touch screen devices. In fact, most of the developers in Apple have actually studied the way the human brain works and incorporated that into the features and availabilities of the iPhone in order to make this device far easier to use than conventional mobile phones. The multi-touch interface of the iPhone is revolutionary in the sense that it introduced the touch screen technology to the world and allowed users to sift through the contents of their phone simply by flicking their fingers.

With dozens of applications, users remain entertained and occupied with their device. With the ease of surfing on the internet, you can respond to your emails, find out all the latest news and communicate with your friends and family. The iPhone combines the features of a perfect music player in it as well except that unlike the iPod, you can now listen to music, sort through your playlists and manage your music using a far larger screen. Users now enjoy watching music videos and movies on their 3.5 inch iPhone display no matter where they are and they can download music to their library directly from the iTunes store. If these applications and features were not enough, the iPhone allows you do all the three activities-play music, browse on the internet and communicate with your phone at the same time. In fact, multi-tasking is one of the features of the iPhone that has made it so popular with corporate executives and business men.

Every year that Apple comes out with a newer version of the iPhone, it strives to make it better and easier. Apple is also known for the simplistic and sophisticated look of their devices, slim, smooth and classy. Even though the iPhone only comes in black and white colors, it is still one of the most desired phones in the cellular market. Another reason for the unrelenting popularity of the iPhone is that fact that Apple garnered a faithful group of worldwide followers using their music player iPod who embraced the iPhone when it first came out and have stuck to their decision. Future outlook for Apple (AAPL)looks bright as well and iPhone will continue to remain one of the most popular phones out there.